I Tawt I Saw a Puddy Tat

"It is not the critic who counts; not the man who points out how the strong man stumbles, or where the doer of deeds could have done them better, the credit belongs to the man who is actually in the arena, whose face is marred by dust and sweat and blood; who strives valiantly; who errs, who comes short again and again, because there is no effort without error and short coming; but who does actually strive to do the deeds; who knows great enthusiasms, the great devotions, who spends himself in a worthy cause, who at the best knows in the end the triumph of high achievement, and who at the worst, if he fails, at least fails while daring greatly, so that his place shall never be with those cold and timid souls who neither know victory nor defeat." Teddy Roosevelt  April 23,1910 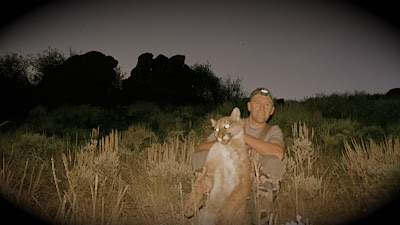 Chasing ghosts, wildcats are synonymous with phantoms and eerie feelings. Feelings of "do you ever have that feeling you are being watched," the type that puts hair on end, and glances over your shoulder. For as many hours and miles logged in the wild, I have only had 7 sightings of these deer killers without the use of dogs. Usually in shadows of a treeline or crags of rocks, running long ridges, or in the company of wintering ungulates.
When in good cat country, with intense populations that are evident in fresh snow, mud, and buried kill sites, $11.50 isn't going to break the bank in stuffing a tag in your wallet. I buy one every year, as we live in great cat country and have ran into several.
This year 2016 was a special year as I had three cat encounters in a month.
First was on our way home down a canyon road and my wife Kim says there goes a coyote across that opening. With it's tail like a streamer behind it on a gallop to the creek bed willows, I yell no that is a mt. lion.
Second experience was a few weeks later on opening night of deer season. It had just dropped 3" of pow pow, and was perfect snowy conditions at 2 pm. It was an unfruitful deer hunt so on the way back out tracing the trail back to the truck with Romeo the llama in tow down a ridgeline we cut tracks. Not just one, but three,  a female with two kittens, and a big bloody drag mark. Romeo and I followed the drag mark with that eerie feeling, and hair on end through the dark timber. My vortex viper rifle scope was turned down to 4x, safety off, and finger on the trigger as we inched forward. A big doe had met her demise, and was now chewing her cud in greener pastures. The three had eaten half of her in the few hours that I had came and returned. Three sprinting tracks were going in the opposite direction as Romeo and I had spooked them off without so much as a sound. Cue in eerie feeling again as we quickly turned and returned to the trail glancing over our shoulder as I whispered to Romeo, " I hope you can run faster than I if this goes south." ;-)
Third experience, and the best to date. Four days after Romeo and I had the encounter with the cougar threesome, we found ourselves in a nasty hole hunting big bucks where few like to venture into. Perched on a rocky outcropping a top a ridge glassing the finger draws and ridges below me with light fading fast, I see something. What appears to be a doe at 800 yds, suddenly leaps up onto a boulder, and my mouth drops, another mt. lion. Now it's almost dark and I have to close 500 yds to make a shot. Good thing Romeo the llama is part thoroughbred as we are running to a flat rock outcropping. Things happened fast, pack thrown on the ground, I'm prone, the leica reads 372 yds, but I have a 30 degree slope below me. Doping for elevation calls for 5 moa, but experience tells me to correct to 4 moa with that kind of slope. Kitty cat's chest is in the crosshairs as the trigger sear breaks and cat is now 5 ft in the air biting at it's chest. Runs 15 yds down the hill and biting at his shoulder broadside, my 6.5 140 gr VLD hits high shoulder dropping him.
Walking up on a mt. lion is exhilarating, especially one with some life in him. Romeo kept his cool, me on the other hand might have profited from an adult diaper once that cat got up, looked at me , spit growled, half charged with ears back. Luckily his back legs didn't work, and a follow up shot sent him to fields of catnip, and large saucers of milk. 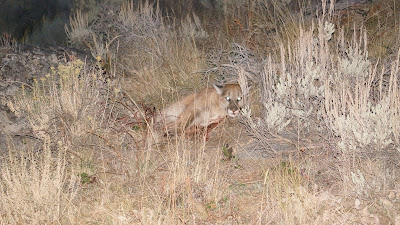 Never apologize for what you love, or hang your head low because predator hunting is controversial. My short 34 years of mortal existence has taught me a simple truth about people and there beliefs,  we will not believe in something we don't live, whether it's religion, politics, or even animal conservation. So if you believe in it, join me by bending down and picking up the gauntlet of challenge that predator hunting offers. I bid you adieu.

Normal sucks. Really. The great big world is constantly evolving, why shouldn't we in the mountains? I had a great leader many moons ago quote often the following: "Definition of insanity is doing the same thing over and over expecting different results."
So why start another hunting blog?
It is the question that inspired me to share my DIY passion and the not "normal" tactics I have had to employ to find more success on the mountain. Also, one step to being successful in something, is to give back. I am no expert or self proclaimed professional anything with any claim to fame, but I do spend a lot of time in the wild, more than I should, answering the call.

This blog is for profit, not of a monetary kind, but one that hopefully inspires, motivates and not only helps us put more animals down on the mountain, but unforgettable experiences as well. Happy Hunting!